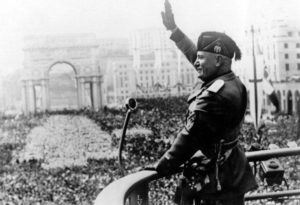 Shortly after Donald Trump claimed victory in the Presidential election, the Alt-Right held a conference in Washington, DC. The Atlantic distributed a video clip of the conference showing Nazi salutes, accompanied by shouts of “Hail, Trump!” (Some heard it as “Heil, Trump.)

Alt-Right founder Richard Spencer claimed that the salutes were not Nazi salutes but “Roman salutes,” in the same vein as his keynote address at the conference, which he titled Long Live the Emperor! It is, of course the same salute, which the Nazis adopted from the Italian Fascists, who revived the old Roman Imperial salute as part of their effort to establish a new Roman Empire. White House strategist Steve Bannon, known for publicizing the alt-right while in charge of Breitbart, is a devotee of Italian Fascist Julius Evola. The games of the ancient Roman circus opened with the gladiators greeting: “Hail, Emperor! We who are about to die salute you!”

In many ways the U.S. Presidential elections are a continuation of ancient Roman political system. The U.S. Senate takes its name from the Roman Senate. One of the offices which the President of the United States holds is Commander-in-chief of the Armed Forces, the original meaning of the Latin imperator, which after the demise of the Roman Republic came to mean emperor.

At the time the U.S. Constitution was adopted, there were two successors of the Roman Empire which chose their leader through an electoral college, the Holy Roman Emperor, chosen by prince electors, and the Pope, elected by the College of Cardinals. The United States does not have princes or cardinals, but the electoral college, based on representation in Congress, establishes the dominance of rural areas, originally based on slave plantations. During the Reconstruction Period following the Civil War, the U.S. Constitution was amended to abolish slavery, but the Electoral College and the Senate remained intact. This led to the rigged election of 1876, when a deal was made to allow the Republican candidate to take office in exchange for ending Reconstruction, restoring white minority rule to the South.

The latest election, which anointed Trump as president in spite of Clinton receiving almost 3 million more votes, continues the precedent set in 1876. In answer to calls to establish a popular election, the antienvironmental American Policy Institute wrote: “The abolishment [they dare not use the word abolition, with its connotation of ending slavery] of the Electoral College would, in fact, establish an election tyranny giving control of the government to the massive population centers of the nation’s Northeastern sector, along with the area around Los Angeles. If these sections of the nation were to control the election of our nation’s leaders, the voice of the ranchers and farmers of the Mid and Far West would be lost, along with the values and virtues of the South. It would also mean the end of the Tenth Amendment and state sovereignty.”

The U.S. Constitution established the Senate as a check on presidential appointments to the cabinet and courts. But, as in Rome, the Senate has become a rubber stamp for the emperor-president. Not only Republicans, but Democratic Senators like Manchin of West Virginia, have lined up to support Trump’s nominees.

Chuck Schumer, the Democratic Senate leader, has prioritized re-electing Senate Democrats, regardless of their political position. He has included Manchin and Heitkamp in his list of big five right-wing Democrats to be supported. Such a strategy will insure the continuation of Senate support for the Trump Administration.

In an article in National Review Neil Gorsuch, Trump’s nominee for the open seat on the U.S. Supreme Court, expressed his opposition to the use of lawsuits to achieve policy goals. The Gorsuch Court, and eventually the lower federal courts, will eliminate conservation lawsuits. Yet the careerists who staff the environmental lobbies continue their influence peddling as though nothing has changed.

If the Democrats were serious about resistance, they would oppose politicians of both parties who enable Trump. Manchin has announced his support for Gorsuch. Tester, a Montana Democrat also on Schumer’s big five list, has said he will not support a filibuster of the nomination. The Supreme Court nominee will affect policy well after Trump has disappeared from the scene. Any Democrat who enables the nomination of Gorsuch must be opposed.

Unfortunately, it is not only leaders of the Democratic Party establishment like Schumer who are supporting Trump collaborators. Senator Merkley of Oregon, generally considered one of the more liberal Senators, has warned against “seeking scalps” of senators like Heitkamp, a supporter of the Dakota Access pipeline.

Wildlife will suffer more under Donald Trump Jr’s nominee for Secretary of Interior Ryan Zinke. Donald Jr, a life member of Backcountry Hunters and Anglers, is notorious for posing with his wildlife kills. Along with the National Rifle Association, Zinke’s supporters include Congressional Sportsmen’s Foundation chair Manchin and vice-chair Heitkamp, and New Mexico Senator Martin Heinrich, who has worked with Manchin, Heitkamp and Tester to increase wildlife killing on federal land. 15 Democrats voted to confirm Zinke.

Some states like California can resist Trump, but climate change cannot be reversed at a state level. New Mexico cannot protect wildlife from either its Republican governor or Democratic Senators.

In a normal political cycle, one might expect the Democrats to eventually return to power. As the country is now divided, this would take at least 8 years, involving the election of Democratic governors and state legislators to oversee the redistricting process following the 2020 census. But there may not be time for that. The Bulletin of Atomic Scientists Doomsday Clock now stands at less than 3 minutes to midnight, reflecting the twin dangers of nuclear war and anthropogenic climate change.

The New Mexico Game Commission is about to approve more wildlife trapping. Sign the petition to Governor Michelle Lujan Grisham to Fire the Game Commission!